The cutting-edge technology used to take out top Al-Qaeda leader Ayman Al-Zawahiri has become a hot topic for defense and intelligence officials across the world, triggering debate and speculations on how a high-value target was eliminated.

President Joe Biden, in an address from the White House, made the announcement on Monday night that a US counterterrorism operation over the weekend in Afghanistan killed top Al Qaeda leader Ayman Al-Zawahiri. “Justice has been delivered. And this terrorist leader is no more,” Biden said.

“No matter how long it takes, no matter where you hide — if you are a threat to our people, the United States will find you and take you out.”

No details were provided either by the White House or the Department of Defence; on how the strike was conducted against one of the plotters behind the September 11, 2001, terrorist attacks, which also carried a $25 million reward on his head.

The US Department of Defence, in a brief statement, had said; “Zawahiri was killed in an over-the-horizon operation in downtown Kabul, where he was residing as a guest of the Taliban. The house was struck by two Hellfires missiles in a precision, counterterrorism operation at 6:18am Kabul time on Sunday.”

With the absence of US boots on the ground in Afghanistan, experts believed the US could have carried out the attack only through a drone strike as it has been carrying out similar strikes in Afghanistan from its base in Kyrgyzstan in the past. The US also has bases at Al Udeid Air Base in Qatar and Al Dhafra Air Base in the United Arab Emirates. 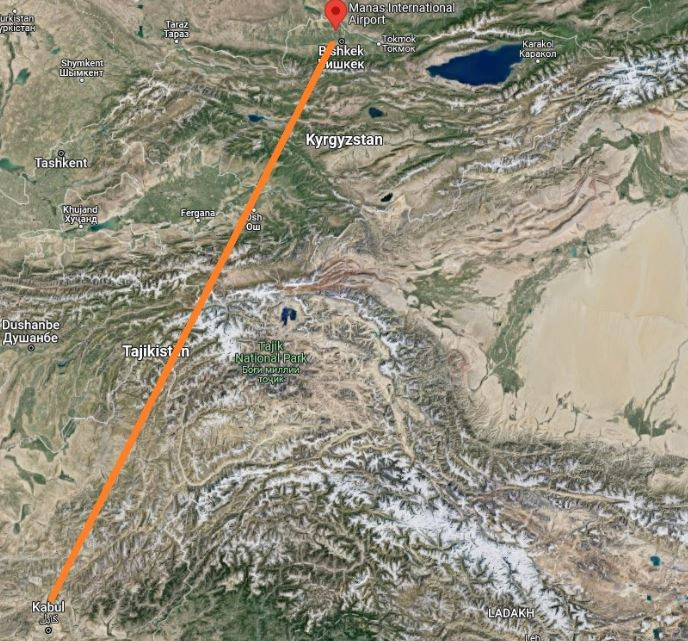 The strike also triggered a spate of accusations and allegations. Zabihullah Mujahid, a spokesman for the Taliban, in a statement, said that an attack on a residence in the capital violated “international principles.”

In response, US Secretary of State Antony Blinken said that by harboring and protecting the Al-Qaeda leader, the Taliban had flagrantly broken the terms of the Doha Agreement.

Pakistan on its part has categorically denied any role in the strike. Director General Inter-Services Public Relations (ISPR) Babar Iftikhar in a statement to a private TV channel Friday night rubbished reports and categorically stated that there was “no question of Pakistani soil being used for this purpose”.

Foreign Office spokesperson responding to a question at his weekly briefing said: “There is no evidence of this action having been undertaken using Pakistan’s airspace.”

“I would refer you to the statement that we have issued (earlier) on this incident, and that is our stated position,” the spokesperson said.

A report in an English-language newspaper citing reports in the US media said the “American drone that eliminated Al Qaeda leader, Ayman al Zawahiri in Kabul was possibly launched from an airbase in Kyrgyzstan.” The report also mentioned the US administration officials who were still refusing to disclose where the drone take-off from and what route it used.

However, the US media reports did mention the military base located near the Manas International Airport close to Bishkek, Kyrgyzstan – unofficially known as the Ganci Air Base – and was used as a major Transit Center for the United States of America in Kyrgyzstan. Defense and Intelligence experts believe that although the base has been vacated by the US air force, however, there is nothing to suggest that it could not be used by the CIA.

The drone strike killed Zawahiri as soon as he walked out onto the balcony of his compound in the Sherpur area, a wealthy downtown neighbourhood, in a US Special Operations Command (SOCOM) operation. 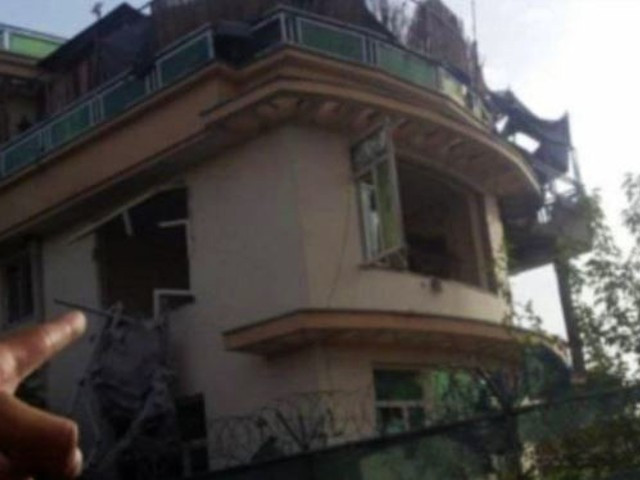 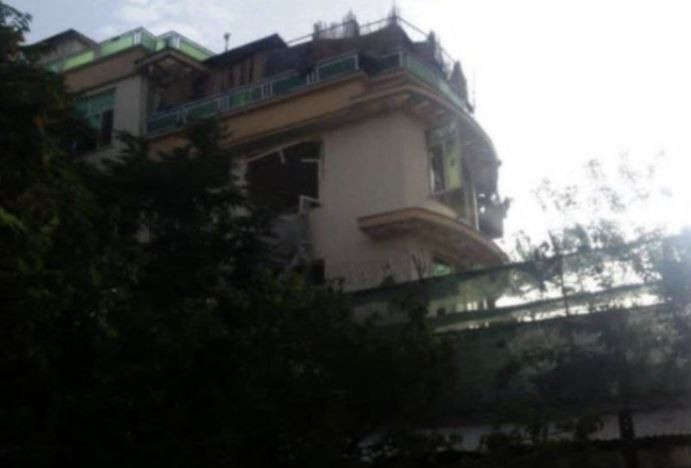 He was living with his family in a home owned by a close aide of Sirajuddin Haqqani, interior minister of the Taliban. His wife and his daughter living in the same house remained unscathed.

Images of the building showed that the entire damage from the strike appeared to be centered on the balcony. According to Charles Lister of the Middle East Institute, who shared the images on his Twitter handle, the apparent lack of explosive damage suggested that it was an R9X – “which is inert & carries self-deploying blades to kill a target with no collateral damage .”

Read more: ‘Question’ about use of Pakistani airspace in Zawahiri attack, not of soil: Fawad

Experts and counterterrorism sources said that the US Special Operations extensively use satellites to track terrorists and have scores of mini-satellites clandestinely tracking high-value targets. Over the year Special Operations Command has also developed several programs to help locate high-value al-Qaeda and ISKP targets using covert tracking tags. The Hostile Force Tagging helps the US track and locate targets that use radio frequency, identification devices, and more elaborate technologies.

The US with the support of its allies has an extensive array of satellites providing it a huge edge over its adversaries. According to the Open Source data, the US has at least 406 satellites, the UK – 5, Israel – 8, Canada – 5, Germany – 6, France – 8, that significantly boost its surveillance capabilities.

National Security Council spokesperson John Kirby said the US operation to kill the al-Qaeda leader in Afghanistan took several months of intelligence work to track the terrorist’s family to Kabul and identify the target. “This mission really took shape over the course of the last six, seven months,” he said in an interview.

Experts believe that the Reaper makes the most sense given its endurance and weapon capabilities. The 36 feet long aircraft with 66-foot wingspans can fly for as long as 14 hours fully loaded with laser-guided bombs and air-to-ground missiles. reaching speeds of 300 mph at an altitude of up to 50,000 feet.

“It was the CIA that probably conducted the strike and they fly MQ-9 Reaper drones just like the Air Force does,” said Stacie Pettyjohn, the director of the Defense Program at the Center for a New American Security, in an interview with C4ISRNET – a group of experts dealing with the use of modern military technology.

BBC quoting US officials said the laser precision was due to drone-fired Hellfires, without causing any collateral damage. According to the experts when a missile is launched from a drone, the weapons operator, sitting from a remote location, uses a set of “targeting brackets” on the screen, and is able to “lock up” the target and point a laser at it Once the missile is fired, it follows the path of that laser until striking the target.

According to the Janes Defense the R9X Hellfire blades that rotate at high speed and deploy before impact — instead of conventional warhead explosives. The missile pierces and cuts its target, rather than blowing it up. The impact takes the intended target, minimizing the likelihood of causing additional casualties.

Professor Michael Clarke, defense analyst and former director-general of RUSI, told Sky News: “The R9X is a pretty new variation of the basic hellfire missile, which goes back around 40 years and was designed in the 1970s. “Hellfire missiles all depend on the warhead you put on them.

He said that the idea of ​​R9X is that it stabs the person to death with rotating blades. The missiles are very small – no more than 4.5ft long – and weigh a maximum of 50kg. They can be fired up to 12km and use a combination of laser and MMW (millimeter wave) technology. 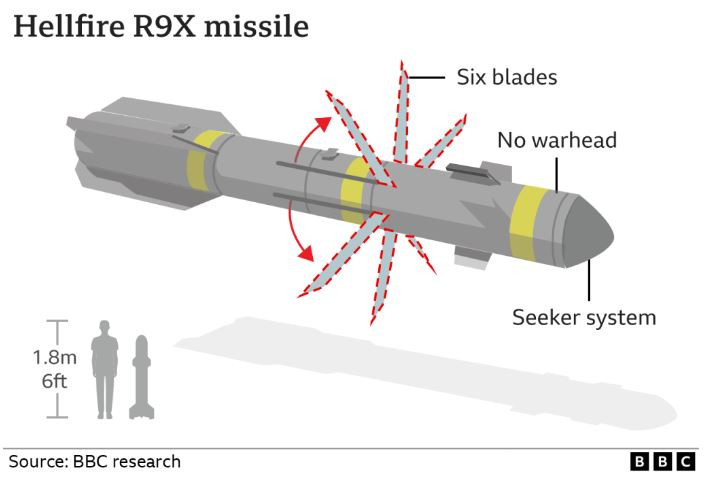 Clarke said the MMW radar or “fire and forget” technology, means operatives can select their target using a laser beam and then retreat without having to keep it focused on the target. “It doesn’t have to be a straight line and it means you can get out of the way. In terms of guidance, it’s the best you can hope to have. It identifies the target and finds its own way there,” Professor Clarke said.