May 18, 2022, was a memorable day for Jesper Frost Rasmussen. It was the day four European heads of state and the president of the EU Commission came to Esbjerg to sign a strategy paper on the expansion of offshore wind energy.

Together, the countries want to increase wind energy production in the North Sea to 65 gigawatts (GW) by 2030, rising to 150 GW by 2050. A framed copy of the Esbjerg Declaration— signed by German Chancellor Olaf Scholz, Danish Prime Minister Mette Frederiksen , and the prime ministers of Belgium and the Netherlands, Alexander de Croo and Marc Rutte — hangs on the wall in Rasmussen’s office.

Rotor blades on the quays

Rasmussen is the mayor of Esbjerg. He knows that his city has a key role to play in the plans. Esbjerg is one of the few European ports that serve the offshore wind industry. Industry giants such as Vestas and Siemens Gamesa ship wind turbines from here, and the electricity producer Örsted supplies around 25 offshore wind farms with spare parts like gearboxes, generators and hubs. The parts can each weigh several tons.

Jesper Frost Rasmussen, the mayor of Esbjerg, knows that his city has a key role to play in Europe’s wind energy plans

The quays are big enough — even for the massive turbine rotor blades, which are stacked and waiting to go. Without infrastructure like this, Europe’s high-flying offshore dreams would never become reality.

German ports, on the other hand, are languishing in the doldrums. In Bremerhaven, a dispute over the development of an offshore wind port lasted for years, ending up in court. Meanwhile, some companies in the sector, such as Prokon, Senvion and Windreich, went bankrupt. Not much is happening at other German ports, either. Only the much smaller Dutch port of Eemshaven is involved. Foundations for the giant offshore turbines are already being shipped from here.

‘We’re all pulling together’

Esbjerg has picked the right moment. For decades, energy generation in the North Sea was dominated by the construction of oil and gas platforms. Now, wind energy is taking over. One in nine jobs in Esbjerg is already directly dependent on wind power — that’s around 5,000 in total. 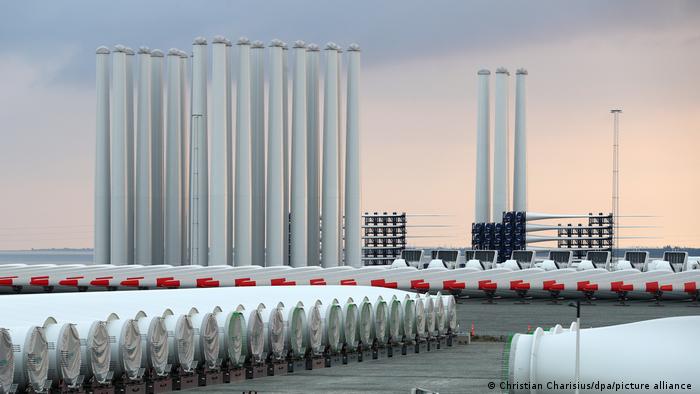 “We’re all pulling together on wind energy,” says Mayor Rasmussen, a member of Denmark’s Liberal Party. “As a city, we make sure the industry gets the sites it needs.” As an example, he explains that the municipality recently decided to extend the harbor by 500,000 square meters (5.4 million square feet), to a total of 4.5 million square meters. Environmental groups were also involved in the planning: “There was no dissent on the issue.”

Planning is well underway for sites that will produce green hydrogen. Part of the steadily growing volume of wind power that arrives in Esbjerg via submarine cables will be used for the electrolysis of hydrogen. For example, the Swiss project developer H2Energy plans to build a 1 gigawatt (GW) electrolyzer on the outskirts of the port by 2024, which will split water into its component elements, hydrogen and oxygen. This electrolyzer would be one of the largest in the world.

And there’s more. The Danish investment company CIP plans to build another 1 GW plant nearby. When it goes online, it will use wind-generated hydrogen to synthesize 600,000 tons of “green” fertilizer per year.

Meanwhile, Christian Udby, CEO of local utility company DIN Forsyning, is already thinking of the next step in the renewable energy chain. “In the future, we want to use the waste heat from the electrolyzers for district heating,” he says. His company needs to take action, because the port’s coal-fired power plant, which until now has supplied around half the city’s heating, is due to be taken off grid on April 1, 2023. 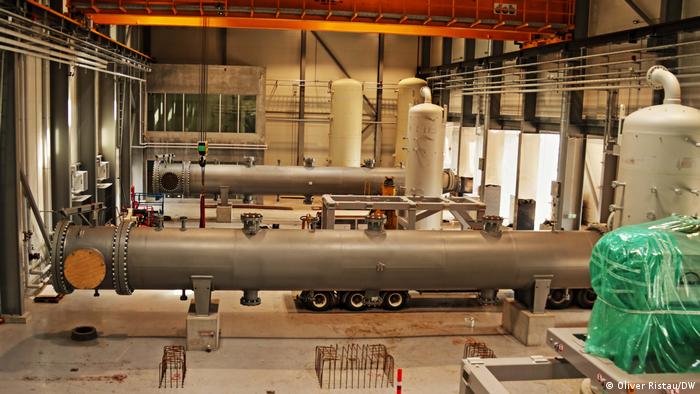 Esbjerg is building the world’s biggest marine source heat pump, which will extract heat from seawater

A broad mix of alternatives is set to take over. The main one, in addition to the biomass, is a 50-megawatt (MW) marine source heat pump, which is currently under construction in the port. The largest of its kind in the world, it will draw water from a harbor basin, extract heat, then discharge the water back into the North Sea, farther off. The technology is being supplied by German companies MAN and Volkswagen.

It will be the first time this innovation has been launched commercially in Denmark, and will have taken barely five years, from the initial idea until the start of operations. Hamburg also has ambitious plans to replace a coal-fired power plant: River source heat pumps have been under discussion there for far longer. However, it will take a few more years before the project is implemented there.

This article was originally written in German