Supernal, the air mobility company of the Hyundai Motor Group, presenting the cabin concept of the eVTOL, a fully electric aircraft designed for intra-city passenger journeys that’s scheduled to start commercial flights in the US in 2028.

The Supernal eVTOL cabin concept was showcased at the 2022 Farnborough International Airshow, previewing the upcoming passenger aircraft. The five-seater cabin was created by Hyundai’s automotive designers, taking inspiration from the “biomimicry philosophy” and more specifically butterflies.

The concept looks like the main shuttle of a helicopter, coming with an aerodynamic silhouette, two large butterfly doors on the sides and organic-shaped windows. Still, this is a cabin concept so the exterior design is yet to be finalized and has been created for demonstration purposes.

Inside, the five seats are arranged in a 1+2+2 configuration, with the pilot’s chair having integrated joysticks. The passenger seats have comfortable cushions, seatbelts, and a mount for smartphones at the seatbacks which doubles as a clothes hanger. The deployable center consoles between the seats have some controls and a touchscreen, while a larger screen is mounted at the back of the pilot’s seat. Finally, the roof has an ambient lighting structure, designed for light therapy.

Important factors in the development are a human-centric approach to design, the lightweight nature of the vehicle, sustainability, plus safety and comfort similar to a conventional automobile. The structure is made of forged carbon fiber and the seat frames are made of excess raw material from the manufacturing process. Other materials used include advanced recyclable carbon fiber reinforced thermoplastic, plant-based leather, recycled plastic fabric, and responsibly-sourced woods. 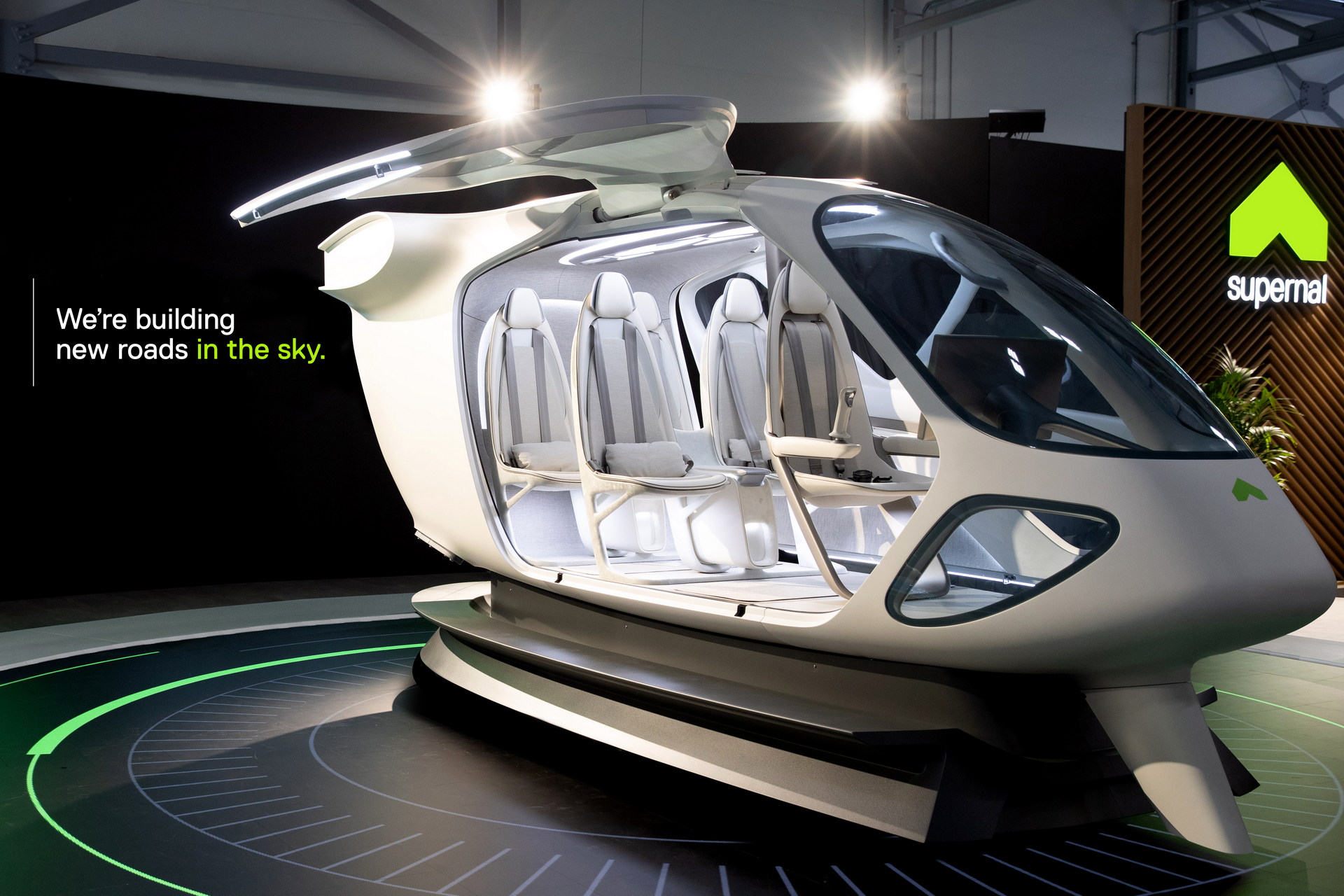 Hyundai Motor Group is working with more than 50 affiliate companies in the automobiles, automotive parts, construction, robotics and autonomous driving sectors, in order to set up a supply chain for the aircraft development and production. Shortly after the debut of the Supernal eVTOL, Rolls-Royce and Hyundai Motor Group signed a Memorandum of Understanding with the goal of bringing all-electric propulsion and hydrogen fuel cell technology to the Advanced Air Mobility (AAM) Market. The first aircraft with jointly developed electric fuel cell technology will be demonstrated by 2025.

Hyundai wants to certify the Supernal eVTOL for commercial use starting from 2028 in the United States, with Europe and the UK following shortly after. In addition to the battery-powered aircraft for the Urban Air Mobility (UAM) market, the company is also working on a hydrogen-powered mid-sized aircraft for the Regional Air Mobility (RAM) market that will be able to transport cargo and passengers from city to city starting from the 2030s in Korea.

Hyundai didn’t mention target pricing for its aircraft but said that the scale of the manufacturing process will result in an affordable price point over the coming decades.