A top aid to Iranian Supreme Leader Ali Khamenei said Sunday that his country has the ability to produce a nuclear weapon, but is choosing not to do so.

Kamal Kharazi, the head of Iran’s Strategic Council on Foreign Relations, told Al Jazeera’s Arabic channel: “It is no secret that we have the technical capabilities to manufacture a nuclear bomb, but we have no decision to do so.”

“In a few days, we were able to enrich uranium up to 60 percent, and we could easily produce 90% enriched uranium,” he said.

Iran is in the throes of negotiations to save a failing 2015 agreement it signed with world powers that was supposed to prevent it producing a nuclear weapon. The so-called Joint Comprehensive Plan of Action provided Iran with relief from sanctions in return for curbs on its nuclear program. It was signed between Iran and the US, Britain, France, Russia, China, and Germany.

However, in 2018 the Trump administration pulled out of the pact — saying it did not go far enough to prevent Iran producing nuclear weapons and also due to its concerns over Iran missile development program. Washington reimposed stiff sanctions on Iran which responded by dropping many of its own commitments to the deal, ramping up its nuclear activities and in particular increasing uranium enrichment beyond the limits of the JCPOA.

European-sponsored talks to bring the US back into the JCPOA have stalled for months and another recent round of negotiations between Iran and the US in Qatar also failed to make progress.

Kharazi said negotiations on a return to the nuclear deal with the US are difficult, due to distrust between the sides and because, he claimed, Washington will not provide any guarantees that it will remain in the agreement.

He further rejected any possibility of including Iran’s missile program or its regional policies in the negotiations — as to do so would be “surrender.”

Israel, which opposes a US return to the JCPOA, has threatened to act alone in striking Iranian facilities if it feels there is an existential threat to the Jewish state from Iran equipping itself with nuclear weapons.

Kharazi also commented on the recent visit to the region by US President Joe Biden, which included a stop in Israel where he signed a declaration of security commitment to Israel, and a visit to Jeddah in Saudi Arabia for a summit with Gulf Council leaders.

He claimed that Israel “is in a phase of weakness, and US President Joe Biden’s support for it will not bring it back to the fore.”

Kharazi dismissed the Jerusalem Declaration — signed by Israel and the US last week — as repeated dogma that will not produce any significant results. At the signing ceremony, Biden vowed to use all power available to stop an nuclear Iran.

He also described efforts to organize defense cooperation among some Arabs states — together with Israel and including Saudi Arabia — against threats from Iran as empty threats. He pointed to the Saudis who themselves have publicly said the idea is not an option. 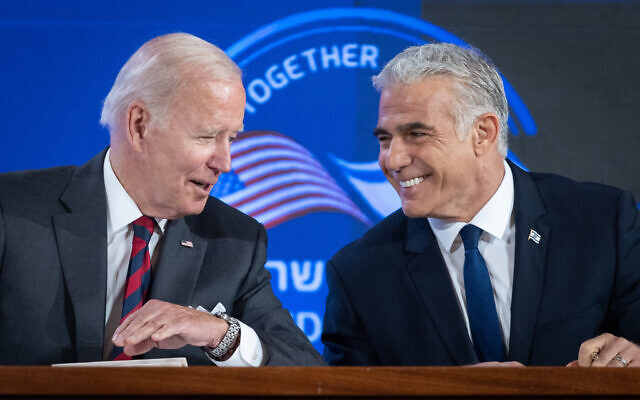 Saudi Foreign Minister Prince Faisal bin Farhan insisted Saturday that he was not of any talks at the Jeddah summit aware on including Israel in an integrated Middle East air defense network — an initiative that Washington and Jerusalem have both discussed openly in recent months.

The idea of ​​a joint air defense network between Israel and its Arab neighbors was raised during the Negev Summit of foreign ministers from Israel, the US, the United Arab Emirates, Bahrain, Morocco, and Egypt in March.

In late June, Defense Minister Benny Gantz said an air defense pact between Israel and its regional allies to combat Iran was “already in action.”

Israeli cooking is taking the world by storm. Here’s Your chance to join in…

The Times of Israel Community is excited to present our new virtual cooking series, B’Teavonwhere world renowned chefs show you how to make classic and modern Israeli dishes.

Learn more Learn more Already a member? Sign in to stop seeing this

We’re really pleased that you’ve read X Times of Israel articles in the past month.

That’s why we started the Times of Israel ten years ago – to provide discerning readers like you with must-read coverage of Israel and the Jewish world.

So now we have a request. Unlike other news outlets, we haven’t put up a paywall. But as the journalism we do is costly, we invite readers for whom The Times of Israel has become important to help support our work by joining The Times of Israel Community.

For as little as $6 a month you can help support our quality journalism while enjoying The Times of Israel AD-FREEas well as accessing exclusive content available only to Times of Israel Community members.

Thank you,
David Horovitz, Founding Editor of The Times of Israel