Within the small community of Marra Marra Creek in New South Wales, AustraliaLeopold Banchini Architects has built an off-grid cabin made entirely out of timber. Its pillars are made out of repurposed 200-year-old electrical posts, giving a new life to the Ironbark timber. Meanwhile, Spotted Gum timber growing in the region is used for the beams of the ceiling and floor. The details and furniture are made of repurposed Turpentine timber from the old jetty built on the banks of the creek. Both solar energy and water are collected on the roof and stored on-site making the house fully self-sustainable.

The small community of Marra Marra Creek was established by settlers in the early 18th century, most probably using inmate labor to cultivate the land. However, the electrical network never reached the creek and the community remained ‘off the grid’ and only accessible by boat at high tide until today.

Marra Marra Shack is built on the land of the Darug People. ‘We acknowledge the Traditional Custodians of the land on which the house is set, their rich cultural heritage and deep connection to Country, and pay our respects to their Elders past, present and future.’ Leopold Banchini Architects shares. ‘Always Was, Always Will Be Aboriginal Land.’ the studio adds. The cabin is situated on a steeply sloping plot

The steeply sloping site location is acknowledged by the structure’s stepped longitudinal section and densely spaced structural grid. Meanwhile, the interior is entirely focused on one single large north-facing window orientated towards the creek edge. The window is split in half and can be hoisted upwards using counterweights, allowing the landscape into the tranquil timber-lined interior space. Two small rooms open to a patio protected from the wild nature surrounding the building. Above the house, the flat roof offers a large terrace in the tree canopy.

The house is entirely built in timber; only the façade is covered by thin fire-resistant fiber cement sheets. The footings are pinned to the underlying sandstone bedrock, avoiding the need for heavy concrete footings and reducing the impact on the site as well as the number of trades and machinery required during the construction process to a bare minimum. 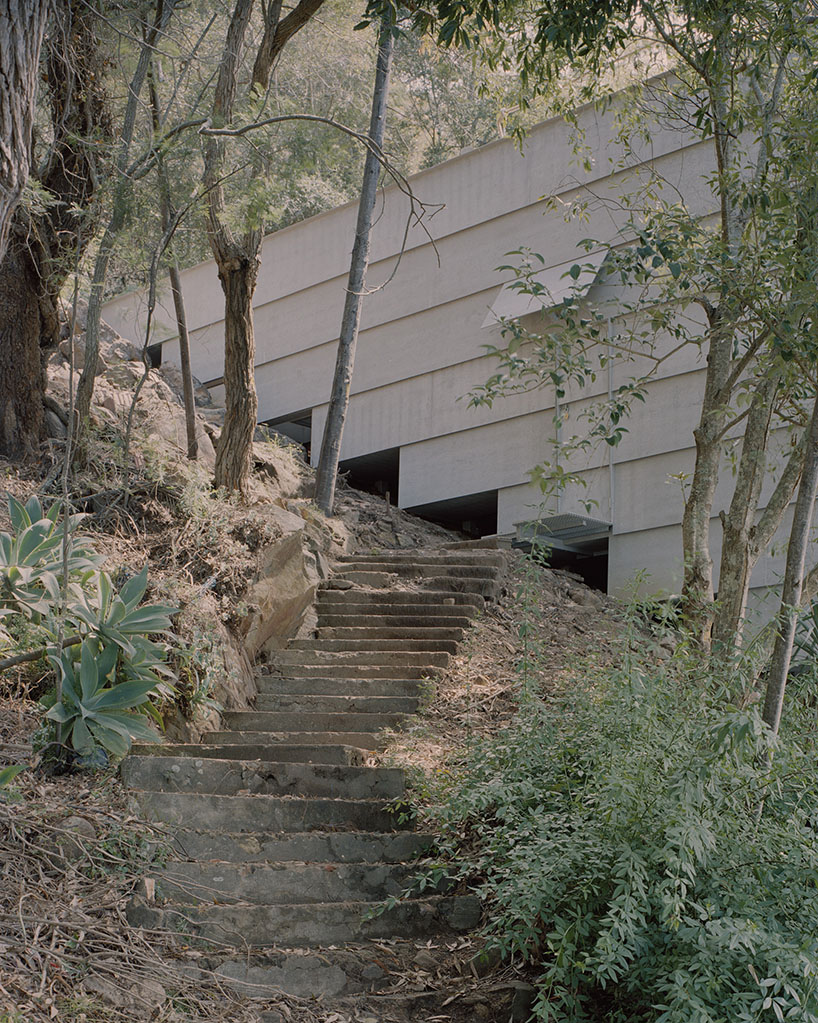 the house is entirely built in timber; only the façade is covered by thin fire-resistant fiber cement sheets