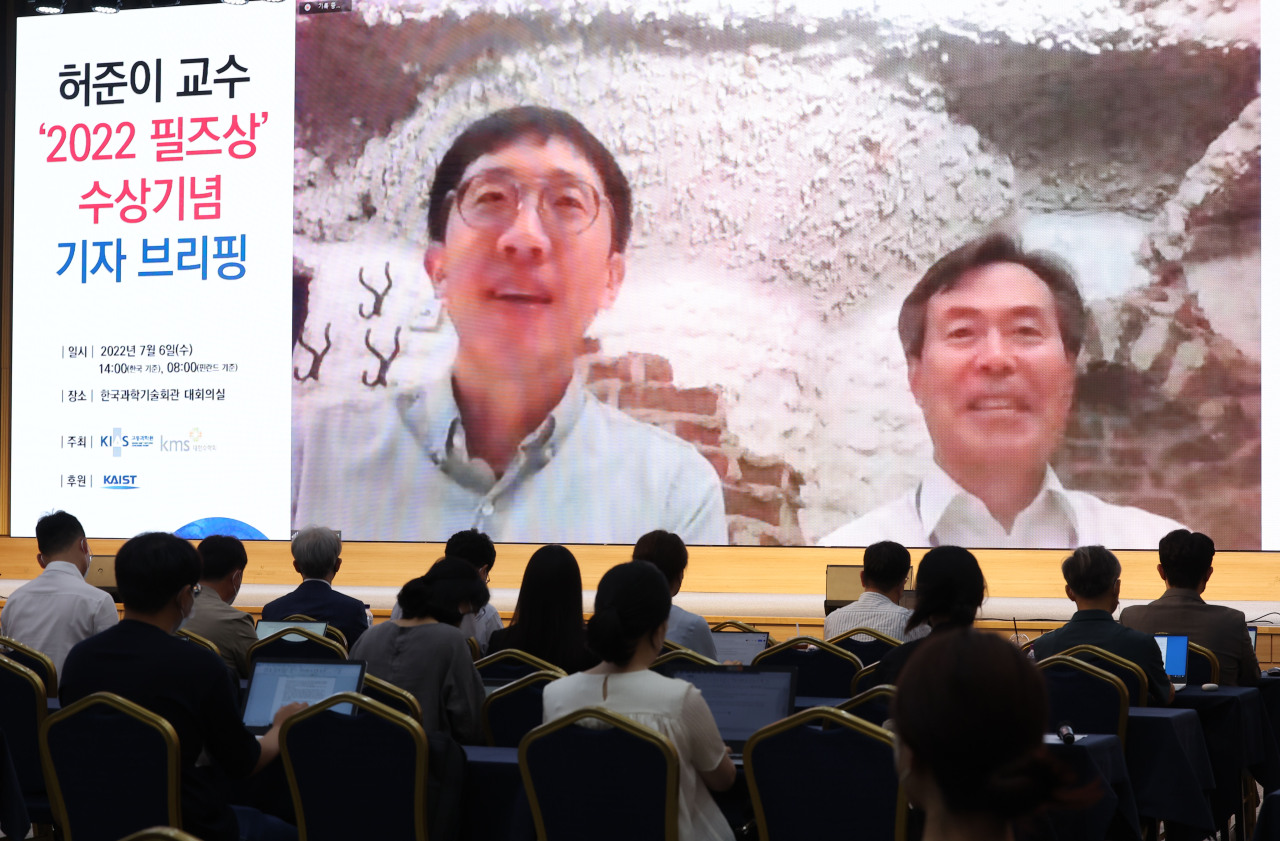 Korean American mathematician June Huh speaks to reporters at the Korea Institute for Advanced Study in Seoul via videoconference on Wednesday. (Yonhap)

Korean American mathematician June Huh on Wednesday underlined the importance of communication and collaboration when it comes to solving difficult problems in mathematics, a day after he became the first person of Korean descent to win the internationally prestigious Fields Medal.

“The charming point of mathematics is that collaborative research has become very active in today’s mathematics,” Huh said in a press conference at the Korea Institute for Advanced Study in Seoul.

Huh joined the reporters via video as he was still in Helsinki, where the awards ceremony had taken place the previous day.

“Rather than working by yourself, I think working with your colleagues and sharing thoughts can be much more efficient and it can take you deeper (into problems). Such communication processes have great impacts on mathematicians. I feel satisfaction from them, so I became addicted to mathematics,” he said.

Pointing out that most of his studies were done through collaboration with other mathematicians, Huh said it is difficult for him to pick a favorite endeavor.

“It is like looking back at photo albums for the past. I cherish all the moments that we had when we were exchanging ideas. Most of my works were completed through coincidences after coincidences,” Huh said.

Asked what young mathematicians need in order to achieve success, the 39-year-old professor emphasizing the importance of having a supportive environment where they can relax and chase after what they enjoy.

“I hope (young mathematicians) can have a research atmosphere where they can relax and stably pursue long-term projects with some breathing room,” he said.

Huh is widely known for his proof of the Rota conjecture — an underlying pattern in mathematical graphs that was always found to be true, but that had never been proven from first principles for more than 50 years.

He collaborated with fellow mathematicians to explain the Rota conjecture by using ideas from singularity theory to matroid theory, two areas of math that were considered entirely irrelevant.

Huh has also solved many other conjectures, including Read’s conjecture, which he proved in a 2012 paper by making heavy use of methods from algebraic geometry, according to the Ministry of Science and ICT.

The ministry said Huh’s studies have greatly contributed to many areas including semiconductor design and machine learning.

Huh, who serves as a professor at Princeton University and a distinguished professor of mathematics at the Korea Institute for Advanced Study, was honored for his studies in the field of combinatorial algebraic geometry.

Born in 1983 in California, Huh came to South Korea when he was 2 years old. He went to elementary and middle school here. He took the high school graduation qualification exam after dropping out of high school, and went to university in 2002.

Huh majored in physics and astronomy as an undergraduate at Seoul National University and studied mathematics at the university’s graduate school. He obtained his doctorate in mathematics from the University of Michigan in 2014.

Huh plans to spend the summer in Seoul to continue his studies at KIAS.