In an article recently published in the journal Additive Manufacturingresearchers discussed the application of thermal video-imaging for the in-situ monitoring of material extrusion operations in big area additive manufacturing (BAAM). 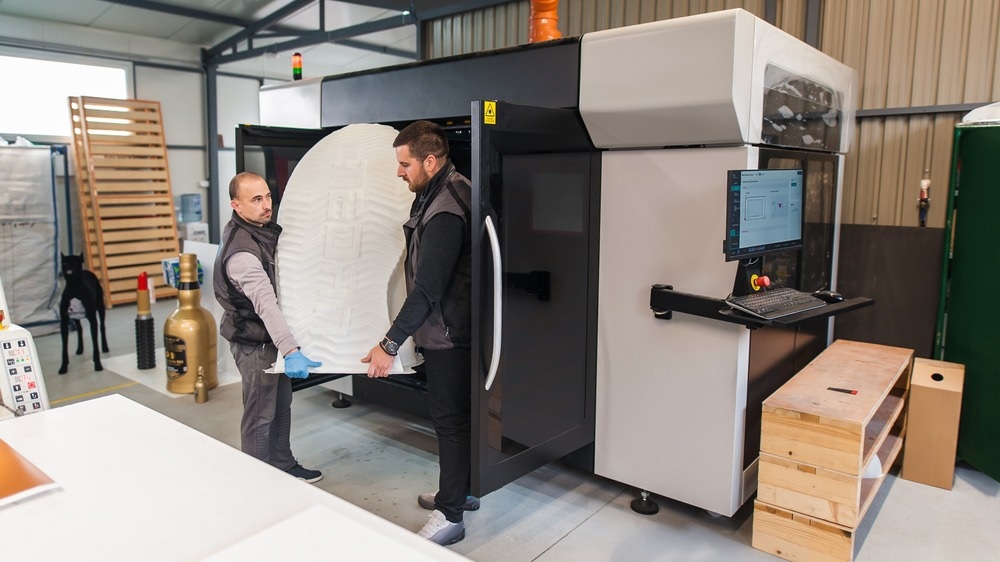 A nozzle is used in the material extrusion (ME) method of 3D printing to deposit molten material layer by layer. In the early stages of AM dissemination, ME attracted a lot of attention. Extrusion AM techniques have been incorporated into new industrial and research sectors in recent years thanks to the advancement of large-scale printing technologies and the use of a greater of materials.

However, low process stability and repeatability continue to be a barrier to the advancement of this technology. Theses led to a series of research incentive projects on in-situ process monitoring, which attempted to use inline measurements and data mining to avoid, detect, and mitigate the existence of part faults for first-time-right manufacturing.

Because temperature dynamics are so important in establishing the mechanical properties of the finished products, infrared (IR) video collection systems have been used in an increasing number of investigations among the various in-situ sensing setups suggested in the literature.

There are currently no approaches for in-situ thermal monitoring of ME processes, despite the efforts made to research temperature evolution and validate analytical and numerical models. The use of in-situ infrared data to automatically find localized temperature anomalies has also not been suggested in any study. A better level of robustness against poor external illumination and a stronger detection capability in the presence of darkly colored or clear feedstock materials are two benefits of adopting IR video sensing in this situation rather than conventional vision systems.

In this study, the authors presented a data-driven methodology for in-situ thermal profile monitoring. The suggested algorithm extracted, simulated, and contrasted the cooling history at several sites. A method was suggested to determine the cooling history of 3D printed geometry, to draw general conclusions about the process, and detect anomalous thermal profiles, which could indicate a lack of bonding and/or other flaws. This method combined a tracking algorithm with the automatic region of interest detection, robust regression for functional data modeling, and region of interest tracking. In addition, a novel method was illustrated for automatic detection of “hot” and “cold spots,” or local temperature inhomogeneities, which were frequent indicators of serious flaws in 3D-printed parts.

The team applied the proposed approach to an actual case study of BAAM in partnership with the oak ridge national laboratory. The suggested methodology offered three key contributions in particular. It offered a method for obtaining temperature profiles at each site while taking into account the flow of video and image data obtained from the IR camera. A unique approach was described to fit and model thermal profiles that were resilient to missing data and disruptions and enabled the investigation of the spatio-temporal model of cooling to find outlier profiles or comprehend the overall process. It also offered a fresh approach to locating hot and cold regions that could be used with any ME method.

The researchers used the device created by Oak Ridge National Laboratory’s manufacturing demonstration facility and references to IR videos obtained during BAAM. The experimental setup and the data gathering system used during the process were presented. The methodology, which was broken down into the three components, ie, spatiotemporal analysis of thermal profiles, extruder tracking, and hot/cold spot detection, was described.

The actual bead width, which was around 6 mm, was one order of size wider than the camera’s spatial resolution of almost 9 pixels in the image. The contamination rate for the proposed profiles was roughly 22%. Results demonstrated the efficacy of every solution put forth and open the door to zero-defect production.

It was observed that research attention was still needed to increase the process repeatability and stability of ME technologies, especially in light of the quality demands from all the newly developing stakeholders in the molding, oil and gas, marine, and aerospace sectors. A sizable class of flaws had a negative impact on the overall quality and integrity of final 3D-printed parts. Given the high prices and lengthy production times of AM, along with the challenges associated with part inspection and reworking, these aspects were even more crucial.

According to the findings, thermal modeling could measure and illustrate how the temperature profile changed during the entire process. Fitting coefficients, in particular, demonstrated an asymptotic trend that reached a stable state around the tenth layer. Due to the proximity to the outside environment, which could release heat through convection and irradiation, the material on the outside of the layers cooled more quickly.

A slower cooling rate and a flatter thermal profile were visible in the material in the center of the extruded layer. This effect intensified as the process continued. With performance that was quite resilient to variations in window size and the primary parameter of the control chart, the proposed method was demonstrated to be effective in the identification of both hot and cool areas in various layers.

In conclusion, this study suggested a data-driven method for tracking the temperature of ME processes, with a focus on big area additive manufacturing. In order to examine the stability of the variance of the thermal map in a moving window, the changes in temperature gradients and their variability were studied and modeled.

The authors mentioned that in-situ monitoring is emerging as one of the most promising approaches for defect reduction in light of the success of other AM technologies, opening the door to first-time-right production and zero-waste manufacturing. They believe that this study can be utilized to rethink deposition and optimization tactics for process parameters.

Disclaimer: The views expressed here are those of the author expressed in their private capacity and do not necessarily represent the views of AZoM.com Limited T/A AZoNetwork the owner and operator of this website. This disclaimer forms part of the Terms and conditions of use of this website.