153 tons of electrical waste were collected in Leitrim in 2021 by the country’s largest recycling scheme – an annual increase of 13.6% for the county in a year which saw a national peak in electrical recycling.

4.76kg of e-waste was recycled per person in the county last year according to WEEE Ireland – an increase on the county’s 2020 collection rate of 4.19kg but falling below the 2021 national average of 10.9kg per person.

“People in Leitrim have greatly contributed to e-waste recycling every year, and we want to encourage that trend,” said WEEE Ireland CEO Leo Donovan.

“One of the key habits of consumers are encouraged to embrace is to stop hoarding end-of-life electronic goods – estimated at 4-5kg of e-waste per person.

“So many of these appliances and devices can be repaired, re-used or re-gifted, but if they cannot, make sure you recycle them for free.

“Our consumption is only going in one direction. In 2021, an average of 12 household electrical products were sold for every person in Ireland.

“If we are buying more electronics, we need to adopt a one plug in, one plug out mantra as we do not have enough raw materials in the ground to keep up with growing global demand.

“It is now more important than ever to rescue e-waste after consumption of new electrical devices such as mobile phones, computers, small kitchen appliances and white goods soared during the pandemic.

“After the safe removal of hazardous elements, 82% of all material that we collect is recovered for use again in manufacturing through both indigenous operators and specialist processors in Europe.

“Most end-of-life products contain metals and minerals in higher concentrations than primary resources.

“These stock of resources are the urban mines of the future, so our recycling efforts can have a significant impact on the environment.” 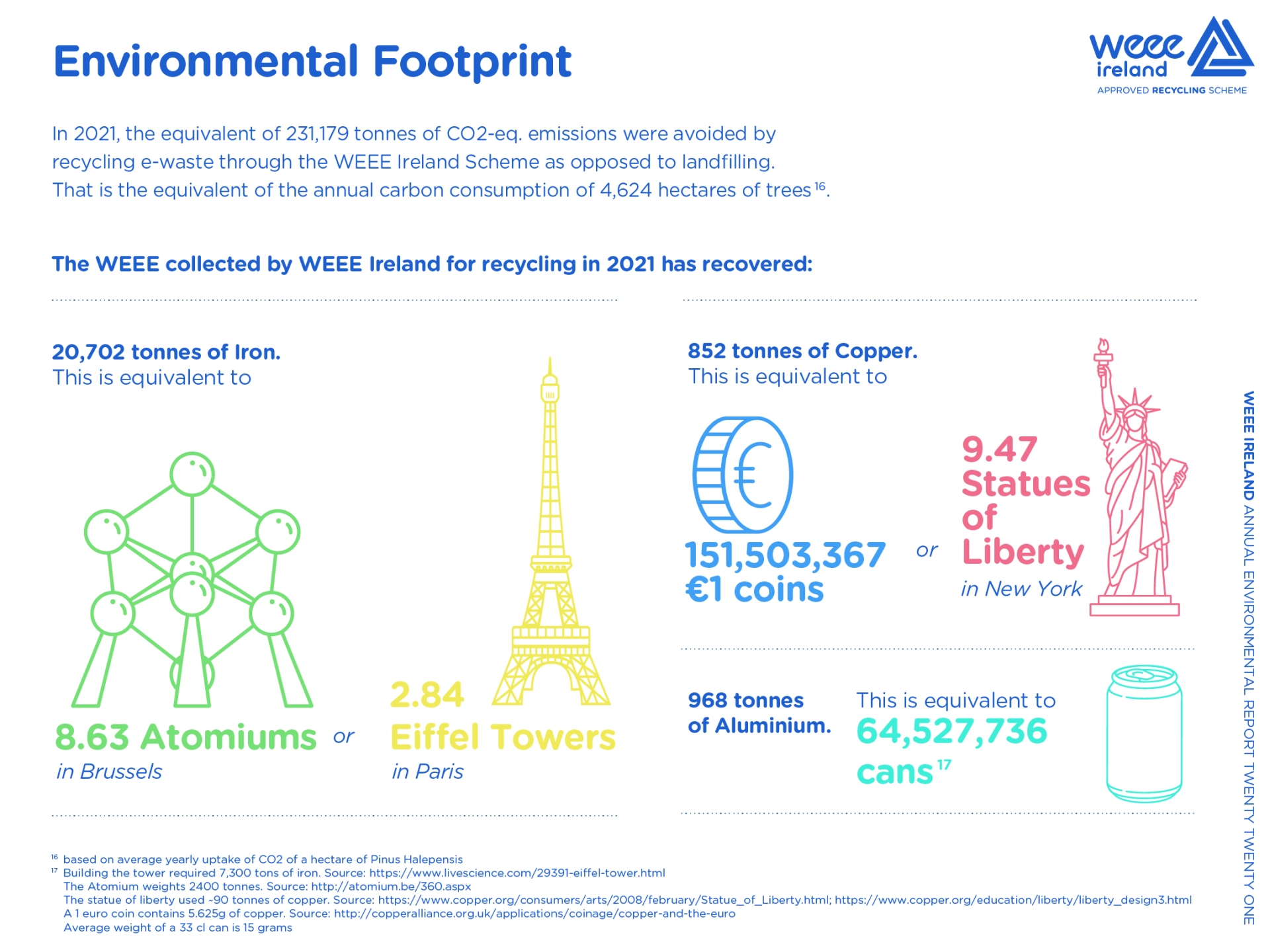 WEEE Ireland is one of the best performing recycling schemes in Europe, with a record 18.7 million waste electrical items collected in 2021, the organisation’s annual report has revealed.

In 2021, the equivalent of 231,179 tons of CO2 emissions were avoided by recycling e-waste through the WEEE Ireland Scheme as opposed to landfilling. That is the equivalent of the annual carbon consumption of 4,624 hectares of trees

WEEE Ireland accounts for over two thirds of all national waste electrical and electronics collection activity on behalf of 1,296 producer members.